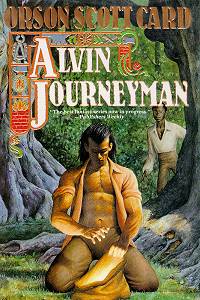 Using the lore and the folk magic of the men and women who settled the North American continent, Card has created an alternate frontier America: a world where folk magic really works, and where that magic has colored the entire history of the colonies. Charms and beseechings, hexes and potions, all have a place in the lives of the people of this world. "Knacks" abound: Dowsers find water, the second sight warns of dangers to come, and a torch can read the heart of anyone. And Alvin Miller, the seventh son of a seventh son, is a very special man indeed.

Alvin is a Maker, and what he can make is a new future for America. But to do that he must defeat his ancient enemy, the Unmaker, whose cruel whispers and deadly plots have threatened Alvin's life at every turn.

Now a grown man and a journeyman smith, Alvin has returned to his family and friends in the town of Vigor Church, to share in their isolation, to work as a blacksmith, and to try to teach anyone who will learn the knack of being a Maker. For Alvin has had a vision of the city he will build, and he knows that he cannot build it alone.

But the Unmaker is not through with Alvin. If that spirit of destruction cannot stop him by magic, or war and devastation, then it will try to crush the young Maker by simpler means - more human means. By lies and innuendo, and by false accusations, Alvin is driven from his home back to Hatrack River, only to find that the Unmaker has been there before him, and that he must now stand trial for his life.