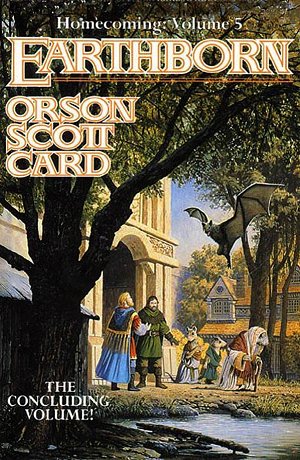 Orson Scott Card concludes his epic Homecoming Saga -the story of the return of human beings to Planet Earth after forty million years - in this fifth book of the series.

High above the Earth, the starship Basilica orbits. On board the huge vessel are a sleeping woman and an artificialvintelligence, the Oversoul of Harmony, returned at last to its planet of origin. Of those who made the journey, Shedemei alone has survived the hundreds of years since Earthfall and the return of the children of Wetchik to Earth.

She now wears the Cloak of the Starmaster, given to her by Nafai when he chose to live out his life on Earth. The Oversoul wakes her sometimes from her hibernation chamber to watch over her descendants on the planet below. The descendants of Harmony have at last made uneasy peace with the Earth's new children, the Diggers and Angels, and all three intelligent races are learning to live together, though it is not easy. The population has grown rapidly-there are cities and nations now, whole peoples descended from those who followed Nafai or Elemak. Shedemei watches with sorrow as the war between those two brothers lives on in the enmity of their descendants.

But on the planet below, among the people there, Shedemei and the Oversoul can see the influence of the Keeper. And now, in Shedemei's dreams, the Keeper speaks to her again, sending powerful warnings. She is needed on the surface below, with her knowledge and the power of the Starmaster's Cloak. And so at last she determines to go. The last living child of Harmony will return to Earth and search for the Keeper as she once searched for the Oversoul - by being its servant until at last they come face to face.

ORSON SCOTT CARD is the nationally best-selling, Hugo and Nebula awardwinning author of Ender's Game, Speakerfor the Dead, and Xenocide. The previous books in the Homecoming series are The Memory of Earth, The Call of Earth, The Ships of Earth, and Earthfall.