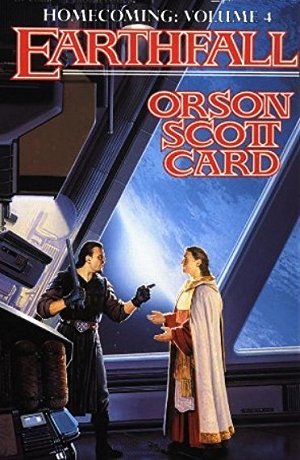 High above the planet Harmony, the Oversoul watches. Its task, programmed forty million years before, is to guard the human settlement on this planet-to protect this fragile remnant of Earth from all threats. To protect them, most of all, from themselves.

But now the great artificial intelligence is failing. On the planet, the Oversoul has lost control of the population. Forbidden technology has been rediscovered. War has broken out. The only repair lies light years distant on a lost and ruined Earth; the only way to get there is in the hands of trusted humans.

The Oversoul selected the family of Wetchik to return to Earth. Now grown to a tribe in the years of their journey to the planet Harmony's hidden starport, they are ready at last to take a ship to the stars. But from the beginning there has been bitter dispute between Nafai and Elemak, Wetchik's youngest son and his oldest. That dispute has grown to murderous hatred in Elemak's heart.

On board the starship Basilica, named for their lost city, the children of the tribe will become pawns in the struggle. Each of the two factions is making secret plans to be awakened early from the cold-sleep capsules in which they will pass the long decades of the journey. Each side hopes to gain years of influence on the minds of the children, winning their loyalty in the struggle for control of reclaimed Earth.

But the Oversoul is truly in control of this journey. It has downloaded a complete copy of itself to the ship's control computers. And only Nafai, who wears the Cloak of the Starmaster by the Oversoul's command, really understands what this will mean to all their plans for the future.

ORSON SCOTT CARD is the nationally bestselling, Hugo and Nebula Award winning author of Ender's Game, Speaker for the Dead, and Xenocide. The previous books in the Homecoming series are The Memory of Earth, The Call of Earth, and The Ships of Earth.