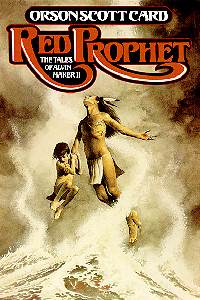 In the first tale of Alvin Maker, Seventh Son, Orson Scott Card introduced his readers to a very familiar (but just slightly different) pioneer America where magic works. Hex signs are powerful, good and evil presences roam the land, and many people have special talents.

In Red Prophet, we learn more about those talents, both the minor gifts of the white people (starting fires, finding water, sensing life) and the much grander gifts of the Indians, whose lives are filled with a beautiful green music. By the sound of that green music, an Indian can run all day and all night without catching his breath, can coax a rabbit out of its hole and ask its permission to be his food, can live in harmony with the earth and all its beings.

Young Alvin Maker, the seventh son of a seventh son, has extraordinary talents for a white boy - he can cause stone to split smoothly under his hands, his knots never untie, he can knit bones, and he can call small animals to do his bidding. Stranger still his talents are imperceptible to the Indians, who usually hear the fire-setting of the sparks and the water-finding of the dowsers as an interruption in their music, but who cannot hear Alvin at all.

Lolla-Wossiky is an Indian whose fate is closely linked with Alvin's. He's been an undignified drunk since he was eleven, when he watched white men murder his father. The black noise in his head since the death shot rang out has drowned out the green music he needs to live well, and his life is a constant search for the right balance of alcohol to still the black noise without silencing the green music - until he meets Alvin.

Lolla-Wossiky's brother, Ta-Kumsaw permits no Indian in his circle to touch whisky (except Lolla-Wossiky). Ta-Kumsaw keeps his dignity even when face-to-face with White Murderer Harrison (better known in our history as William Henry Harrison), governor of the rough frontier town of Carthage City. Ta-Kumsaw wishes to see the white men confined to the eastern lands, leaving the west free for red men to roam as they always have. Harrison believes in the survival of the fittest - and he intends for white men to be the fittest.

From the small country town of Vigor the stockades and bar-rooms of Carthage City to the secret dream mountain of Ta-Kumsaw's people, Red Prophet brings to life an America to fulfill the dreams we all grew up with, a strong and growing land of heroism and magic. Only Orson Scott Card could create and people such a rich and imaginative landscape with such powerful conflict and such pervasive realism.