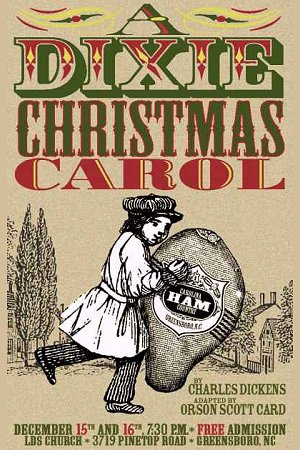 I created this adaptation many years ago when I was trying to make a go of a theatre company at The Barn in Provo, Utah. All the existing scripts of A Christmas Carol were expensive and slow, since they required set and costume changes. I thought it could be done better and faster and, yes, cheaper -- so I wrote my own script.

Years later, after I moved to Greensboro, North Carolina, I went back to that script and revised it to fit in this southern textile-and-tobacco town. I left it set in the previous century, but after the Civil War, and determined that to use race-neutral casting, so that any character could be of any race -- in other words, it was a fantasy South that didn't actually exist but should have <grin>.

The play escapes from the trap of expensive sets and time-consuming set changes by framing it as a story told by the pilferers who rob Scrooge while he's on his deathbed. Ben Wiggle, an undertaker, and Annie Flammer and the widow Mrs. Dilber have come together to sell their ill-gotten gains to Old Joe, a wordless old fence with a heart of stone. In the process of comparing their haul, they talk about the man who died and Ben Wiggle sets out to tell the story. He plays the part of Marley's Ghost, and Annie, Mrs. Dilber, and Old Joe play the ghosts of Christmas Past, Present, and Future.

The play moves swiftly -- it can be read or performed in an hour and a half -- and yet includes more of Dickens's story than usual because the little scenes don't require a complete set. Many of the male characters are changed to women (for instance, those collecting for the poor) because there are always more female actors than male in amateur productions.

Downloading this script does not include permission to mount a production of the play before an audience. If you are interested in a full production, whether amateur or professional, for a paying audience or free admission, contact us to inquire about acquiring performance rights.